Skip to content
HomeNot a Great Day: Delivered Half My Promise

Well, I went back to look at the last time the non-member’s pages were updated as I was adding new material on top of the newest stuff on them. My last posted update there- and I remember posting updates around that time in kind of a rush- was in early february! It’s been FIVE MONTHS!!! I lived up to my promise, but only updated the smaller 3 of the 6 Sections: http://www.blackstreetbbw.com/TourBreast7.html, http://www.blackstreetbbw.com/TourHips8.html and http://www.blackstreetbbw.com/TourOther2.html! Now I have to do some work and get the rest posted today. Maybe updating the nonmember’s area thing’s working, because I hit 1350 views on blackstreetbbw.com yesterday, a number I haven’t made or surpassed in a long time… but it might’ve had something to do with things beyong my control, because I didn’t do that with my usual number of visitors. Nope, I did it with 457 visitors- over 9% more than the largest number of visitors I remember having when I wasn’t smashing my own records, and over 100 visitors more than what I’d get on a bad day. Still though, I’m sure the updated pages had something to do with that. Sadly, all that extra activity didn’t result in even a single new member yesterday. Traffic was up a lot for my http://www.clips4sale.com/store/21356 Clips for sale store too, but no sales there either. And I was so on target to hit my financial goals for the day with all the rebill recurring payments that came in in the morning. Got a great start, then no sales.

When I was going back through old tour pages to copy HTML to make the newer ones I noticed all the prices posted were out of date! First thing I thought was, ‘was this posted pricing inconsistency what had cost me new members? I know I didn’t like that kind of thing when I thought I was seeing it as I signed up to get my domain and webspace when I was setting up the site, and wondered if it had irked some people out of joining. I fixed just about all of it, but a lot of the newly updated Tour Pages are missing text and have typos, so I wondered if the bonus of the fixing has been cancelled out by slopover. I hope the newness puts everything ahead.

Here’s the big reason everything didn’t get done yesterday. The day killer! I went out to the other Wal-Mart to go shoot some videos. I was really tired from working, but I felt like going out of the house and you know you never know what woman you’ll see if you don’t go out. If you stay at home the only ones you’ll see are on TV. I went out, and I stopped at 7-Eleven. It was 7-Eleven’s birthday, so they were giving free Slurpees to everybody. I got one on that hot day, and that’s the only good thing that happened to me that day. I stopped by another store on my way over to the Wal-Mart.

Hmmm… what’s this? An email just came in? Then my GoDaddy email just logged me out for inactivity right before I could click the tab… A new member today already? Yay! Now I don’t have to worry about today being like yesterday as long as my morning rebills come in.

Anyways, back to the blog. Yesterday was the WORST DAY of candid videography I’ve ever had in almost three years where I didn’t get caught and punished. I got to the store, all tired and stuff hoping I’d see somethign that’d make my long trip worth it. I had 90 minutes where I had to stay in the store because I couldn’t go to the mall (I’ll tell you about that maybe the day after tomorrow or the day after that), and 30 minutes wouldn’t be enough, so since the bus runs every HOUR it’d have to be AN HOUR and 30 minutes. During that entire time I only saw two good looking women. One AS SOON as I got there who was leaving when I saw her, and one right as I was leaving whos was getting ready to exit when I saw her, and that was it. I couldn’t find any decent women anywhere! I couldn’t even find a woman that was mediocre! I was really really looking forward to even a mildly iffishly attractive woman. Man, I couldn’t even find medium, let alone good. The store may as well’ve been full of men because I was in there for SEVENTY-FIVE MINUTES before I found one other woman at all worth taping. And she wasn’t even that special:

She was just such a sight for such sore barely-able-to-stay-awake eyes that I had to tape her. Here are the other two women I saw, in order. 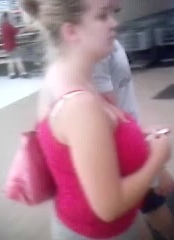 I was very glad for pregnant women, for had it not been for them, I’d truly have come back with nothing. At least I can count on finding them in the Wal-Marts if I stick around long enough. Somebody’s got to be pregnant. Yes, I tape pregnant women, too, and they’re mostly all I saw today. Including one I taped as I got off the bus to go home in defeat. I was so defeated by this that I cancelled today’s today’s trip out. I’d planned to fix up my upcoming camera and go out, but it’s better I didn’t I think now.

One thought on “Not a Great Day: Delivered Half My Promise”