Skip to content
HomeThink I Almost Got A Young Blackstreetbbw ‘Quickie Model’: So Used to Not Asking It Took Me Too Long

I’ll admit that one reason my site, www.blackstreetbbw.com, is a candid bbw website is because I really really don’t have the social skills (a.k.a. ‘game’) to get permission to take pics or make vids, so I have to get women’s bodies on tape without thier permission or knowledge. I do have plenty of what I need to get women to like me, but I just can’t go around in public asking for what I want like a few guys could. The other reason though is that I want it all, not just the big, beautiful women who’ll say yes! Another serious flaw I have is that I don’t process information mentally fast enough to use it on in an unfolding situation, so I often end up finding the solution to a situation after it’s over. Then I use that solution if that situation ever arises again.

I WILL FINISH THIS POST VERY SOON!
*blackstreetbbw.com webmaster returns on March 21st and resumes posting*
…That’s kind of what happened here, except the situation lasted so long I almost had enough time to use the idea I got for the situation in the situation.
I was using the internet in the main library because my internet connection was off at home (click here if you care to read the brief posting about that) and this girl 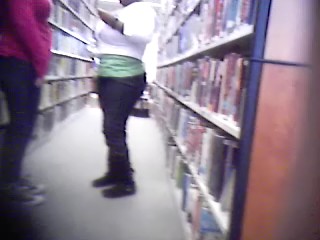 and her skinny friend were in there. They were all over the library, and they were constantly running about and giggling and whatnot. Seeing them run upstairs made me really want to see the big one come down. A long time after I missed that it dawned on me that I could probably get young girls in moods this good to ‘model’ for the camera right here in the library! I bet if I’d just asked them I could’ve easily’ve gotten these silly chicks to do what I most wanted there and come down the steps for me! By the time I realized that though, they were finally gone. They were hanging in and around the library for so long too! Why’d they have to leave then?! So what if the library was closing! It wasn’t for another hour! 😦 … Darn. Stupid slow me.